The Damage a Toddler Can Do in Just Five Minutes

August 8, 2015August 8, 2015 | adminadmin | 0 Comment | 12:10 pm
I like to do Mel’s hair myself. She never stays still for more than three minutes and I am yet to find a hair stylist who would be as patient as I am with her. The whole routine from shampooing to braiding is normally a nightmare. In between there’s crying, running, whining and at times biting. I therefore do all I can to bribe her into being cooperative. 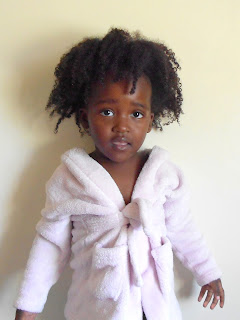 The other day I was making her hair when I decided to distract her with this box where I keep all our hair supplies; hair pins, my combs, her beads and bands as well as her daddy’s brushes, moustache wax and razors. I went through the box just to be sure that everything was safe, removing the razors and the smaller beads while ensuring that the wax and other tins were tightly capped. Seeing that I was right there with her, I never thought that anything would go wrong.

My plan actually worked because the different textures and colours kept her occupied just long enough to allow me complete the task at hand. When I was done, I checked again to see whether everything was intact and nothing seemed out of place. I therefore put everything back and we went about our daily lives as usual.

At two and a half years old, Mel is already potty-trained. My only task nowadays is to empty the potty when she is done.  This is what I was about to do the following morning when I saw something oddly colored in her poop. A little concerned, I moved to the better lit living-room to take a closer look and what I saw  almost made me faint.

The poop was dotted in a rainbow array of huge beads; the ones I had assumed were too big to do any harm. Not one bead, not two, but six beads! It still baffles me when and how she swallowed them. Had this happened when someone else was caring for her, I would have been one angry mom.

It just goes to show that kids can do so much damage in the five minutes you look away. I should have known that she was up to no good when she became quiet and abnormally cooperative. I am thankful that she did not choke, but I have to be more careful in future.


Until we see each other again,

Measles vaccination Two children, both aged 9 months died yesterday after receiving their measles jab. 7 others are reported to be in critical conditions following the botched vaccination. The routine

The Food and Drugs Administration (FDA) has sent a warning letter to Kim Kardashian West following an Instagram post she updated recently praising a morning sickness drug, Diclegis. The reality