The Best Lessons my Strawberry Plant has Taught me

I was not worried at first. I was confident that the contract would be renewed after a month or so, and I took the time to focus on myself and dedicate more time to my little girl. Days turned into weeks and weeks into months. It soon became clear that I was on my own and I needed to do something fast to be able to look after my young family.

I have always been passionate about writing and creating content and I knew that if I found a way to monetize my hobby, I would never have to rely on a job for the rest of my life. I therefore came up with a plan and I was prepared to see it though no matter what. It was during this period that my mom passed by my place from visiting my auntie with a couple of strawberry seedlings. 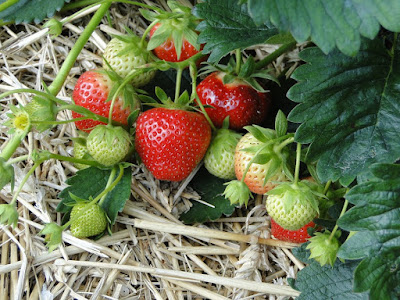 She gave me one of the seedlings, I planted it in an old recycled water bottle and hung it on my balcony. This tiny plant would become my inspiration for years to come.

For some reason I really connected with the weak, lonely plant. It reminded me so much of myself and where my life was at that time. I equated it to my small venture and learned a lot from how the plant responded to how I took care of it. When I attended to it, manured and watered it consistently, it thrived! One time I traveled up-country for a few days and when I came back it was on the verge of death.

Strawberry plants are runners. What this means is that they produce runners also known as stolons that grow their own roots and eventually develop into a clone plants. My single plant became two plants, then three and then four. It gave me consolation that if I was persistent at working hard in my business; it would, in time, grow and expand.

I cannot count the many times I felt like I was going nowhere. The many times I put in so many hours and got almost nothing in return. But my plant gave me the strength I needed to carry on.

When it flowered for the first time, I plucked out the flowers to help it become more productive in the next flowering season. I have had to do the same in my work. You have to invest back the little you get if you want to reap big in the future.

My paternal grandmother grew strawberries in her farm when I was growing up. I loved them so much and I cannot count the number of times I tiptoed through her maize plantation to steal the juicy fruits. My lovely plant has produced very many fruits through the years. I only ate a handful of those. All the rest have been consumed by my two girls.

We were away for 2 weeks during the holidays and when I came back, my plant was brown and wilted. I forgot to install a drip-irrigation system like I’ve always done every time we are away. The first thing I did when I came back was water the plant. But this time I was a little too late.

I watered again the day after, and the day after that. Yesterday was the sixth day and I finally had to admit to myself that the plant was really gone. As I am writing this my business is now standing on its own two feet and I have the little plant to thank for it. It inspired me and helped me to keep going even when all seemed impossible.

I am completely heart-broken but I rejoice in knowing that I will never forget the lessons I learned from it. I know I could never replace it, but I plan to get a new plant soon. And this time I will plant it in a beautiful vase because I can.

Here’s a sad song I absolutely love by UB40. It perfectly summaries how I am feeling at the moment. Enjoy.

A diaper at a time.,
Until we see each other again,

He has been of out the country the last two years. He left very suddenly for further studies when our daughter was only nine months old. He came home to

There are two things that I avoid talking about in this blog; what a genius my daughter is and how am married to the most amazing man. The reason I