She Turns One Today

Pregnancy is highly contagious! When the bug infects you, everyone around you starts getting pregnant. It happened with my first; three of my close friends and I were all expecting at the same time. Things got a little weirder with my second. A very close friend of mine called to announce that she was pregnant a few days after I had tested positive. When I asked her due date, she told me the exact same date as mine!

Any mom will tell you that the worst thing you can do to a pregnant friend is beat her to the finish line. But science was on my side. Most second-time mothers deliver before their DD. I was therefore confident that I would meet my baby before my friend. I would not even feel sorry for her.
A day before our due date, my friend called early in the morning and described what I could tell were early signs of labor. After telling her how disappointed in her I was, I advised her to start getting ready for the hospital.
That day was devastating for me. I was so consumed by jealousy that I walked for close to 5 kilometers hoping to induce my labor. Boyfriend obediently provided company and timed my contractions which would stop the minute I stopped walking. By 5 I had given up completely. I went to bed disappointed and exhausted.
All that walking helped; I was admitted at 6:30 the following morning having dilated 4-5 cm. I knew from what I’d read that the second delivery is normally much easier and faster as compared to the first. Given that I had experienced just 3 hours of active labor with my firstborn daughter, I did a little math and concluded that I’d be holding my baby by mid-morning that same day.
7 torturous hours and 3 cervical examinations later, I had only dilated an extra 1 cm. My labour was dragging itself so much that at 10am I asked to get off my huge butt and walk around the hospital. Boyfriend would follow me wherever I went and when the contractions hit, we’d stop and he would rub my back. I had my trench coat on, but the tired blue hospital gown underneath and the slippers made me a spectacle.  People stared.
The pain kept coming and going. I kept begging the nurses to induce me and get it over with. They kept telling me to be patient. ‘But it’s not as painful as it’s supposed to be,’ I argued.  I should have kept my mouth shut for by 5pm, I was singing a different song altogether. Let no one lie to you that breathing deeply helps. It doesn’t!  I went from moaning to screaming frantically.
The minutes leading up to the pushing are the worst. But it gets much easier after that. Compared to transition (between 8 and 10cm) pushing is a walk in the park. The baby’s cry finalizes the dramatic episode and everything goes quiet and painless. 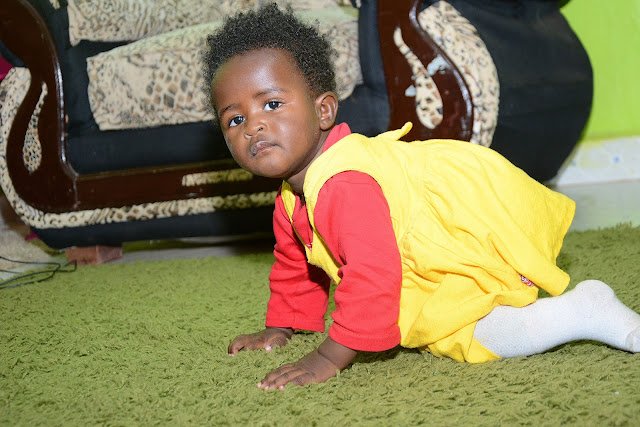 And just like that, our family had increased by one. They say that when it comes to kids; one is one, two is twenty. The last one year I’ve appreciated these words. The cries are louder, the laughters are heartier. The days are longer and the nights are shorter. My first baby grew overnight and assumed the role of a big sister so beautifully. I’m forever proud of her.
So much has changed since. I took a break from office jobs and invested more in my blogging business. I’m now a full-time work-from-home-mom. It’s so much work but when I hit the pillow every night, I sleep like a baby log happy and completely fulfilled.

She has 8 teeth, she can walk on her own, she says about a dozen words and loves to eat.

It’s her birthday today and I wish her many, many more. May you grow up to leave a mark in this world sweetheart. Mama loves you to the moon and back.

Five found us in town. My friend Kay was to hook me up with her friend and she was to be sorted out by F; a friend of hers. F

Update: I first published this post in April 2012. And now that I do the math, I was 2 weeks pregnant with my first born daughter. I hope I’ve not

I’m not sure who’s going to be my date for today’s Valentine’s Day, but I know that I already received this gift right here. I wanted to do a post