March 6, 2018March 6, 2018 | adminadmin | 0 Comment | 7:01 am
He has been of out the country the last two years. He left very suddenly for further studies when our daughter was only nine months old. He came home to visit a handful of times; each time expecting his little girl to be the same way she was when he left. It always amazed him how fast she was growing. But behind the excitement I saw a sense of loss. I saw the pain in his eyes when she looked at him like a stranger the first five minutes.  I could tell that he hated the fact that he missed many firsts with her.
How he tried to hold back tears every time he had to go back. Sometimes he hummed a song and walked away without looking back. I would stand there, hoping that he would run back and hug me one last time. But deep inside, I knew that he would not; because if he did he would break down and cry. Hold me tight and swear that he would never leave us again. And all he’d worked for would be lost.
‘When I ask you whether she cried asking for me, don’t tell me that she did,’ he’d tell me before leaving. And like the good wife that I pretend to be, I would do as told. I calculated my answers before typing them, ‘No, she did not even notice that you are gone’, and ‘Yes, of course she remembers you.’ I assured him that kids do not have a perception of time. ‘When you finally come (after 6 months or more), she’ll think that you’ve only been gone for 2 hours.’ I did not believe this. But he did. So much that he held onto it with all his might, and made me repeat it to him a thousand times.
Last week he was counting his last days in school. He was coming back for good and I could not wait to have him back. We would do all the things we loved doing together; I would cook while he cleaned the dishes, we would fight over the remote, he’d do all the ironing because ‘I do it wrong’, we would argue like crazy because he’s never learnt that I’m always right, and I’d make him do most of the work when it comes to our little girl because, to be fair, I’ve been doing it the last two years on my own.
And then Thursday came. There he was making me feel the way I always feel whenever he is back after a long time; like I do not know what to do with him. Do I go get him water or do I tell him that there’s a program I’ve been following and I do not want to miss. Am I supposed to cook something special or should I unpack his bags? This feeling goes away in just one day. By Friday, we were we again.
We planned our Saturday before hand. I was to go to work until 1:00pm and he was to take Melina to the hospital – on Friday she’d peed like a hundred times and we both feared that she had contracted UTI. They would then pick me up from work and we would go visit his sister before heading home.
He called me from the hospital with a very weird question, ‘We’ve been sent to the lab, should I take her to the ladies or do I go with her to the gents?’ I always have an answer but this one caught me off-guard. I asked a colleague but by the time we agreed that the best solution was to ask a nurse to take her, he already had the urine sample. He later told me beaming with pride, ‘I took her to the gents and sanitized her hands after.’ ‘You did good honey,’ I told him. 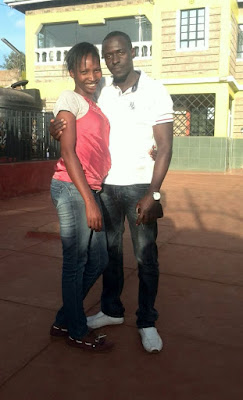 At around 5:30pm, we were leaving the sister’s place and she kept holding us back. When she wasn’t telling us to take more tea, she was telling us to take her photos.  We took lots of them. ‘No, I need to change these shoes,’ she’d say… it went on and on.
We get to the stage and the standing bus needs just one person. The next one makes me uneasy, dozens of college students are waiting to board. They are all wearing matching T-shirts. I hesitate but he takes my arm and pulls me to the bus. I am carrying our girl (she’s now asleep) and he’s holding my handbag and the paper bag with Melina’s medicine.
Since we’re alighting just 2 stages away, we sit near the door, just across the aisle from each other. The students are very rowdy. They keep trying to be loud and funny and it’s all too pathetic. I comment how there’s so much confidence in numbers and he reminds me how he was as stupid just a few years back when he was in KU.
The conductor is at the back collecting the fare and we’re nearing our stop. He stands, gives the driver our stop and starts walking out. I know that we still have a few meters to go and I therefore sit tight. If anything, I have the baby in my arms and I’ll leave when the bus stops.
When I finally get to the door, I realize to my horror that we have stopped in the middle lane. Two of the college students are standing by the door which is now wide open. We’re not yet at the stage; the bus stopped due to traffic but just for a second. Playing conductors, the immature kids opened the door prematurely. My husband is in the middle of the leftmost lane and there’s a white bus speeding towards him less than three meters away. He can’t see it. In the confusion he thinks he’s safely at the stage. He has a confused expression on his face; wondering why we’re not following.
There’s a long hoot and I’m screaming his name at the top of my lungs. In that split second, I see my life come to an end. I see myself losing my best friend barely two days after his coming home. I see him robbed of life right before my very eyes.
He turns to my voice and runs back. The bus misses him by the skin of his teeth. And I realize that we are also moving. He’s left there, in the middle of the road.
When I finally find him, I’m shaking and crying. He hugs me and I want to hit him… Hard! ‘I’m so sorry; I don’t know what happened, Cess. I’m not that careless. I’d never do that!’ he’s telling me. I’m trying to understand why someone would alight in the middle of the road but I just can’t. I’ve seen him cross the road. He’s normally very careful.
As he leads me home, a vendor at the stage turns to him and says, ‘That’s your God dude. Now go home and pray.’

Suddenly I feel sick. I want to puke. I am disgusted with myself. He is obviously shaken; terribly shaken.  Did I ask him how he’s feeling? No. Did I comfort him and tell him that all would be well? No. He just cheated death and I’m not thinking about him, or his family. Just me and my kid. And here he is apologizing like he always does. Even when I’m the one on the wrong. Because it is always about me; he’s the good one, and I’m selfish. 🙁

Five found us in town. My friend Kay was to hook me up with her friend and she was to be sorted out by F; a friend of hers. F

Dear lovely girl, When you were little, I worried a lot about you. I wondered what kind of a world I’d brought you into. I asked myself whether I would